The whole wafer is constructed of a single piece of metal with a hole cut in the middle so the vehicle’s key can ride through the hole. This design is much stronger than the split wafer as there is only one piece of metal.

The split wafer design is where the whole wafer has been, in essence, split down the middle vertically.  This makes the whole part separated into two pieces that move up and down next to each other.  The area where the two halves meet has a tendency to wear on the contact edge so that the key (which is also wearing into a “knife edge”) will no longer lift the two individual wafer halves.  Instead, the worn wafers combined with the worn key will allow the split wafers to slide down next to the key.  This action has the potential to cause the wafer to jam and then to break.  In this scenario, the ignition would have to drilled out and be replaced.  If the ignition is able to turn, it can be easily repaired.

The moral of the story is call A-Locksmith-Craig before the wafer breaks so we can do a repair rather than a costly drill and replace.  If it appears to be too late…. Call us anyway because miracles can happen…. Either way we can help. 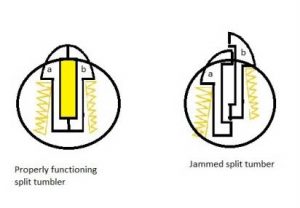 “SPLIT WAFER REPLACEMENT” WE USE